A family dinner doesn’t always have to be a “traditional” dinner meal. In fact one of my all time favorite dinner is simply pancakes. Not just any pancakes though, I prefer my own. Nothing fancy I do use Bisquick so no recipe making is needed however I cook them to my own perfection. Occasionally my husband will ask for a bacon, or bacon egg and cheese sandwich and the kids are always up for some waffles. Another breakfast/dinner favorite of mines are hash browns. I’ve always enjoyed a good potato. 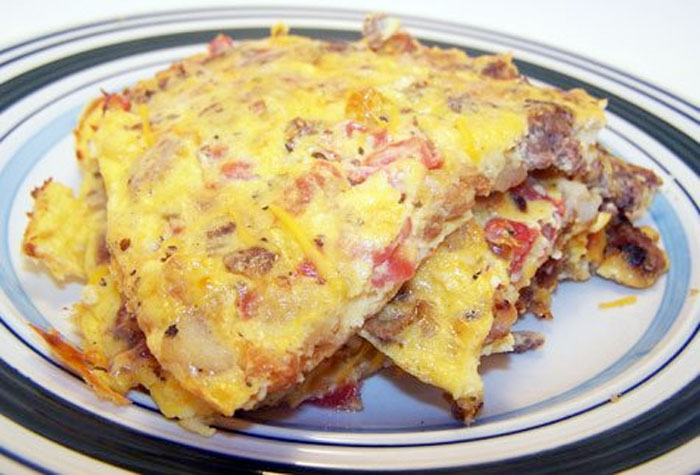 It is not often you will find me in front of the stove taking on a new recipe or creating one of my own. Just this past week I vowed to become more knowledgeable when it comes to cooking and try to make different foods for my family. I’m not quite sure why I took on this mission, maybe it was a challenge and something I felt I needed to conquer. Tired of being the mom who is laughed at for her cooking skills I’ve decided to plow forward and cook away.

So today I bring you one of my first very own original recipes.

So what did we think? My husband had two suggestions and I agreed with at least one. We both agreed that we think the dish would be a little better with the string hash browns versus the hash rounds I used. In my defense I called my son and asked him if we had hash browns and he said yes. They weren’t quite what I wanted but figured they would do. My husband also thinks using the other hash browns and cook until crispy would give the bottom layer a much better texture.

He also felt that additional cheese could be used for a little bit of extra flavor. I myself think that possibly adding some salt with the pepper may give it some added flavor. Spices is not my specialty. Overall I thought it tasted pretty good and had a nice spicy kick with the VELVEETA® Mexican flavor and Mild Ro*Tel®.

This is a sponsored conversation written by me on behalf of VELVEETA/RO*TEL. The opinions and text are all mine.