I’ve been using and working with Fitbit since 2011 when I was introduced to the original Fitbit. Since that time I’ve reviewed for the Fitbit Ultra, Fitbit One, Aria Scale, Fitbit Premium Membership, and the Fitbit Zip.

I recently received their newest product to review the Fitbit Flex.

This slim, stylish device is with you all the time. During the day, it tracks steps, distance, and calories burned. At night, it tracks your sleep cycle and wakes you silently in the morning. Just check out the lights to see how you stack up against your personal goal. It’s the motivation you need to get out and be more active

Being such a loyal Fitbit fan I jumped at the chance to test drive a new product. When I heard about the Fitbit Flex the person I had in mind for this was my daughter. Honey has been asking me for a Fitbit for a while. Since she is only 7 it is not something I want to invest in for her at this time as I don’t know that she would use it long term. My daughter loves to wear bracelets. She often goes to go school with 5 or 6 bracelets from rainbow looms, to pony tail holders around her wrist.

Before I handed over the Fitbit Flex to her I wanted to test it out myself. One Saturday I put on the Fitbit Flex and continue to wear my Fitbit One to do a little dual testing between the two devices. 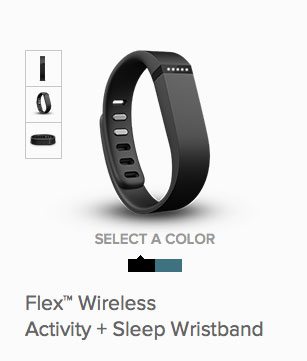 The wrist band comes in large or small which makes it a great fit for both men and women. I received a large which fit me perfectly. It is a little hard to get on. Sometimes the notches don’t fit through the holes in the band all that well. However once it is on it is secure.

Fitbit One vs Fitbit Flex

I wrote down the beginning steps from both devices and then wore them for a few hours while my husband and I ran some errors. At the end of the test the devices were about 300 steps apart. The Fitbit One recorded more steps then the Fitbit Flex. I do not know which device is the most accurate so I can not speak on that but did want to note that there does appear to be a difference.

A friend of mine that owns a Fitbit Flex made the comment that she thought the Fitbit Flex was counting her arm movements so I tested this out as well. While sitting stationary I swung my arm back and forth to see if it would record it as steps. Sure enough it did. To be fair and check if it was a device defect or the technology I also tried the same exercise with my Fitbit One. It too counted the steps. So this inaccuracy is not device driven but due to the technology of how the device records a step. The only thing I can say to this is that since the Fitbit Flex is warn on the arm there is more of a chance of this happening then with the Fitbit One that is worn on the hip or bra.

The Flex is purchased in a black or light grey color. They also sell additional bands that come in teal, tangerine, and navy. I thought this was smart for those that want to match their Flex to their outfit or just prefer a fun color.

Advantage of the Flex

One advantage that the Flex has over the other Fitbit products is the ability to wear it in the shower. This is something you should not do with the Fitbit One.

Overall the Flex works just as good as the Fitbit One, and they have the same features tracking steps, climbs, sleep and they both can connect to your Fitbit account. I think it is a preference as to what type of device you prefer. I myself am a loyal Fitbit One user and I like that the Fitbit is hidden under my clothes, and not visible to anyone. I don’t wear a lot of jewelry so wearing a band all the time would drive me crazy.  I asked a co-worker who was researching the Flex and a competitive product why she wanted bracelet type tracker.  She said…

Because it is just Cool!

What I would really love to see come next from Fitbit is a truly waterproof Fitbit. This past weekend the family and I went to a water park. All the walking and climbing I did I would have loved to see on my Fitbit. Instead that day shows a lot less steps because I was unable to wear it.

Have You Tried The Fitbit Flex Yet?

Previous Post: « New Cracker Jack’s Flavors and Childhood Memories
Next Post: How To Make Kidobi Work For You »