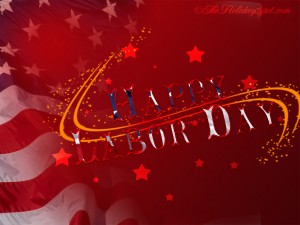 “If all the cars in the United States were placed end to end, it would probably be Labor Day Weekend.” – Doug Larson

“Labor Day is a glorious holiday because your child will be going back to school the next day. It would have been called Independence Day, but that name was already taken.” – Bill Dodds

“A bad day at work is better than a good day in hell.” – Scott Johnson

Q: I asked a little girl do you know why we get out of school for Labor Day?

A: She was very enthusiastic to say “It is a time when all the mommys of the world go into labor”

Q: Father: Do you know, most people don’t have to work today, because it’s Labor Day.

A: Son: If people are not working, shouldn’t we call today ‘No-Labor Day?’

Q: What do you usually do on Labor Day?

A: As little as possible, just like every day!

The first Labor Day in the United States was observed on September 5, 1882, by the Central Labor Union of New York[1] It became a federal holiday in 1894, when, following the deaths of a number of workers at the hands of the U.S. military and U.S. Marshals during the Pullman Strike, President Grover Cleveland put reconciliation with the labor movement as a top political priority. Fearing further conflict, legislation making Labor Day a national holiday was rushed through Congress unanimously and signed into law a mere six days after the end of the strike.[2] The September date originally chosen by the CLU of New York and observed by many of the nation’s trade unions for the past several years was selected rather than the more widespread International Workers’ Day because Cleveland was concerned that observance of the latter would stir up negative emotions linked to the Haymarket Affair, which it had been observed to commemorate.[3] All U.S. states, the District of Columbia, and the territories have made it a statutory holiday.