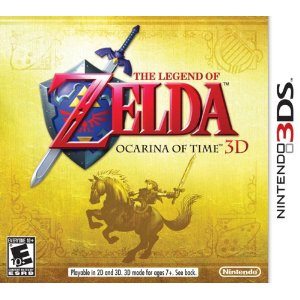 The Legend of Zelda: Ocarina of Time 3D

One thing we do not have yet is the new Nintendo 3DS however I’m suspecting that I might see a request for two of these on this years Christmas list.  My boys may not be glued to their Nintendo DS all the time (thankfully) but when I knew game comes out or a long trip is ahead of us they come in quite handy.  I think both of the boys would love to try out this new DS and this new The Legend of Zelda: Ocarina of Time 3D that will be released this weekend on Father’s Day June 19th.  However I think we should concentrate on getting the system first!

The 25th anniversary of The Legend of Zelda™ video game series goes into high gear with the June 19 launch of The Legend of Zelda™: Ocarina of Time™ 3D game. Available exclusively for the portable Nintendo 3DS™ system, the new game introduces a fully re-mastered version of one of the most acclaimed installments in Nintendo’s fan-favorite The Legend of Zelda game series. Combining adventurous game play and classic story elements with enhanced graphics and previously unavailable challenges, this new edition also highlights the deep, engaging experiences made possible by Nintendo 3DS with intuitive hand-held motion controls and the ability to play in 3D without the need for special glasses.

Experienced fans and newcomers alike will have plenty to discover in The Legend of Zelda: Ocarina of Time 3D as they guide the heroic Link™ on an adventure through Hyrule, where they will encounter vividly enhanced characters and environments. The new touch-screen interface makes it simple to navigate menus and switch between items, while new motion controls allow players to swiftly and accurately aim their weapons when targeting in first-person view. After completing the main game, players will also have access to the additional Master Quest that provides even more challenges with redesigned dungeons, more challenging enemies and environments that are experienced in reverse.

“The Legend of Zelda: Ocarina of Time 3D is the definitive version of a game that is an indelible part of entertainment history,” said Cindy Gordon, Nintendo of America’s vice president of Corporate Affairs. “This is a game for every fan of the series, from those who grew up on Link’s adventures to the new generation of players who are just starting to create their own magical memories in the mythical land of Hyrule.”

The Legend of Zelda: Ocarina of Time 3D introduces new content that is exclusive to the Nintendo 3DS version of the game. After players have defeated a boss, they can replay the battle again in Boss Challenge mode and try to improve their completion time. When they have defeated all eight of the game’s bosses, they can face them all in succession under an action-packed timed run. At select access points in the game, players can also watch special hint movies that provide clues to help solve tricky puzzles and defeat challenging enemies.

For more information about The Legend of Zelda: Ocarina of Time 3D, visit http://www.zelda.com/ocarina3d.