I know this is a little late since Father’s Day was over a month ago but I’ve been meaning to share this special story with you. Some time ago I wrote an article about The Meaning of the Purple Butterfly, at least its meaning to me. A quick refresher for the sake of this article it has become a symbol of my father who passed away in April 2008.

Due to this I often pick up butterflies such as magnets, clips, clings, etc. and put them in different places in our house. The kids are aware of what the symbol means and this way my father is always with us. I also keep a purple butterfly in my car. I have been needing to get something to mount my butterfly as I haven’t been able to find a spot for it so it has been in the center console in my car (at least I believe that is where it was). Fast forward to Father’s Day this year

When I opened my car on Father’s Day I went to step in and looked down and guess what greeted me right in between the door and seat? 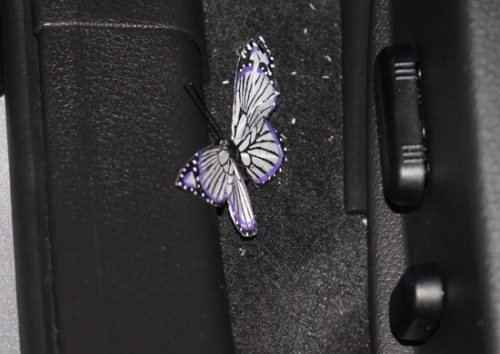 You can chose to believe that maybe it wasn’t in the console, and maybe some how it was moved (how I have no idea), however I believe it was a sign from my father saying hi on a special day made for father’s everywhere. This made me smile and think of the man that had a part in raising. A man that was always kind and caring.