Have you ever noticed that when you become a Mom your senses are heightened to almost super hero proportions? You can smell dirty diapers instantly or stale food hidden in closets or under couches, see stains that a normal eye would miss, and hear a cough or a sniffle from the next room. Even though in Florida we don’t have the incredibly harsh winters some of the rest of the country deals with, the temperatures do dip enough to be considered chilly. Add that to this time of year – which is the cold and flu season – and I’m constantly on watch for first signs of sickness. Without being ever watchful and proactive, a slight sore throat can turn into full blown illness fast. That’s why I love to keep throat drops such as Pine Bros. Softish Throat Relief always within reach. 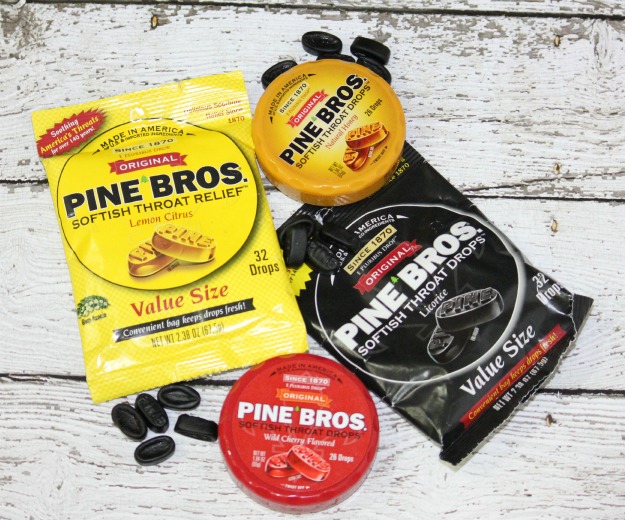 We were recently sent a slew of different flavors from Pine Bros to give a try and put it to the Shibley Smiles test. Here is the thing my kids HATE taking most medicines and anything medicine related. Recently my youngest son was home from school for two days with a pretty bad cold. His two days would probably be a week for anyone else as he never gets sick and when he does he gets over it in hours so I knew he wasn’t feel well at all. One of his symptoms was a sore throat. I had let him pick out some throat drops and I think he tried one and that was it. I really wish we would have had these throat relief drops from Pine Bros on hand.

I’m not suffering from a sore throat so I can’t really talk for how well they work in that matter but I can tell you they are the best throat drops I’ve ever tasted. In fact I’ve had to put them up because my daughter wants to eat them like candy (we do not recommend you eat them like candy). I personally LOVE black licorice and loved that they had this flavor. It is a unique flavor for a throat drop but it works well. My favorite flavors are the licorice and the honey. My daughter prefers the licorice and the cherry.

When it comes to health products, it’s important to me that they are trusted. Pine Bros. is considered the World’s first throat drop and has been around since 1870. It was then that Herman Pine, a former confectionery maker, combined the natural qualities of plant glycerin with the healing properties of gum acacia both of which aid in soothing mucous membranes and alleviating soreness. A softish throat drop was born after natural flavoring and sweetener were added. Pine wanted to provide quick throat relief and cared more about making people happy than making money. His softish throat drops have become one of the most effective, delicious, and unique throat lozenges worldwide. Sticking with what works, the recipe hasn’t changed appreciably in over 140 years. I think the old saying “if it isn’t broke, don’t fix it” surely applies here. 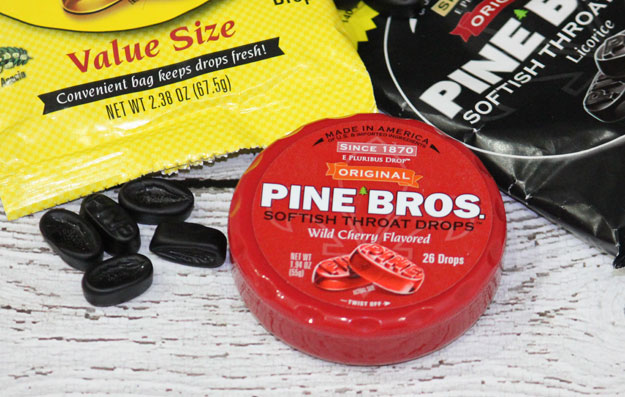 Even though Pine Bros. has been around for that long, they are constantly expanding and at a rapid pace at that. They are now available at Walgreens and Walmart sells the softish throat drops at an everyday low price of $2.97. There’s a flavor to suit everyone’s taste, they come in: Natural Honey, Wild Cherry, Licorice, and new Lemon Citrus. Each drop is only 5 calories and gluten free! They easily fit into your purse or pocket to ease sore throats the minute they start. Whenever I hear a sniffle or the dreaded clearing of a scratchy throat, I make sure to give my family throat drops like these. Be sure to check out Pine Bros on

We are running a fun twitter giveaway, in which you can win a 12 piece variety case of Pine Bros drops. A mixture of all four flavors in both pucks and bags.

To enter to win enter the survey and RT this tweet, that is it. We will randomly select a winner on 2/11.

Enter survey here (don’t worry it is one question): http://svy.mk/1CNPkIO

Have you ever tried Pine Bros. throat drops? What flavor would you like best?

Previous Post: « An Attractive Way To Safe Guard Your Stairs
Next Post: No Dyes No Chemical No Perfume but Great Smelling Laundry »