Does your parents live down the street, an hour away, or in another state or country all together? Did you pray for the day you could start college and move out and far? Or did you relish living with your parents until they finally softly suggested maybe living on your own would be a good thing? At this stage in my life there are two things I think of when it comes to my living situation (well three if you count praying to win the lottery and moving to a large home with maid included). I worry that my children are comfortable and will never leave home and I think about the day my mother or mother in-law may need to move in. 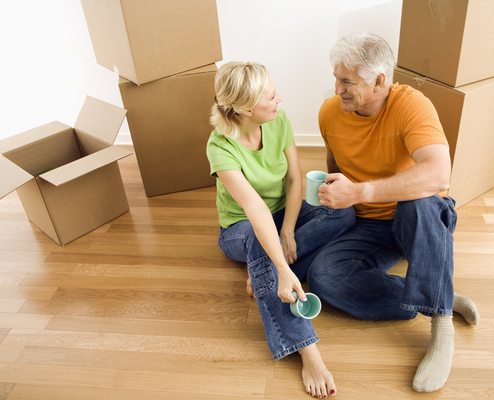 Hopefully the children moving out worry will eventually take care of its self. Though I can’t help but conjure up images of Matthew McConaughey in Failure to Launch. The worry about my mother and mother-in-law is more of a realistic worry. I spent much of my adulthood living away from my parents. My parents moved often when I was young. We moved to Virginia and when they moved on I stayed. It was here I met my husband and began my own family.

My father always lived in Michigan and I visited often as a child but it became less frequent as an adult. My father eventually moved in with my grandfather. I would say he took on the role of caring for a parent but honestly my grandfather has so much spunk and life in him that at 92 years old he still doesn’t need much taking care of.

Since I couldn’t get my mother and stepfather near me I eventually moved my family to South Florida to be near them. My next step was to try to get my father to move a little closer.  The article When and How to Coax Your Parents to Move Closer reminded me of my efforts and has some great tips. I don’t know if my father ever would have made his way down to South Florida, had he not passed away. He was very much a man of the seasons and felt responsible for being there for my grandfather as I knew I would one day need to be there for him, or at least I thought so.

My mother is still relatively young and hopefully it will be some time before I have to consider my role as a child taking of their parent. I worry about my ability to be the best care giver I can be to this precious family member that raised me and made me who I am. Thankfully Genworth has 7 Habits of a Good Caregiver to help guide me when that time comes.

Hopefully it will be a while before I find myself in a care giver situation (other than the current one where I’m cook, maid, taxi driver, and last minute school project helper). I find that it is never to early to prepare for what fast balls life will throw our way!

Do you currently care for a parent? How will you prepare for that day?