Home » Reviews » Become Powerful During an Emergency
Spread the Love

Mother Nature has a powerful way of showing herself around the world from earthquakes to tornadoes and tsunamis to snow storms. Here in South Florida one of our biggest threats from Mother Nature is Hurricanes. I’ve lived in Florida since I was seven and before I moved to South Florida and until then I only had one brush with a Hurricane growing up. Hurricane Elena came close to the coast of Tampa Bay in 1985. My family and I were in a mandatory evacuation zone and due to it stalling in the gulf the storm surge closed many bridges. The unpredictable storm eventually made landfall in Biloxi, Mississippi. 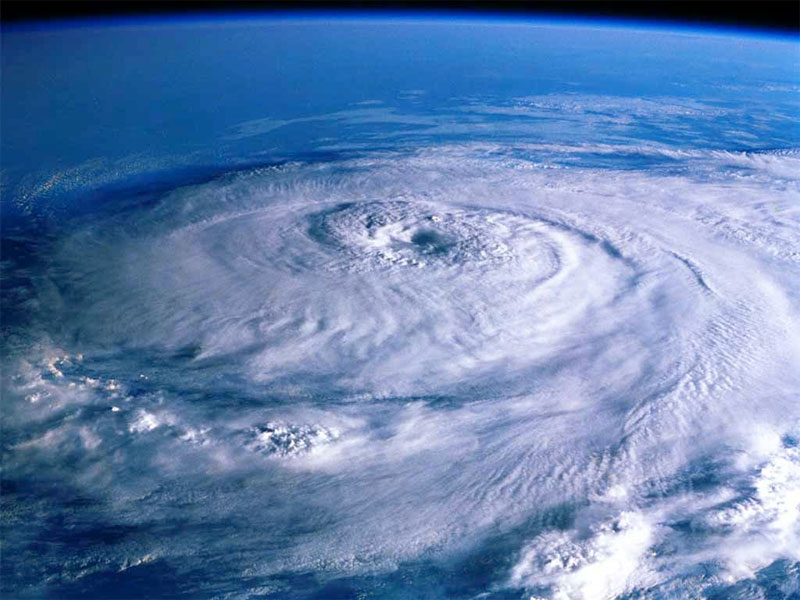 Living in South Florida our threat of Hurricanes is much higher. In fact, we moved down her in 2003 and shortly after experienced a season with the most major hurricanes since 2004, only to be surpassed again with 7 major Hurricanes in 2005. My boys having never experienced a Hurricane before thought that if it rained hard and the power went out it meant there was a Hurricane coming.

A week before my daughter was born we were hit with a pretty nasty Hurricane, Hurricane Wilma. So why am I talking about Hurricanes today? Because there are many ways to prepare for a Hurricane and one way is to own a generator. In 2004 when Hurricane Frances and Jeanne passed right through our city we were left without power for days. We lost all the food in our refrigerator and freezer and the grocery stores followed suit. We spent a lot of money to replace the food but were thankful that this was our biggest issue. 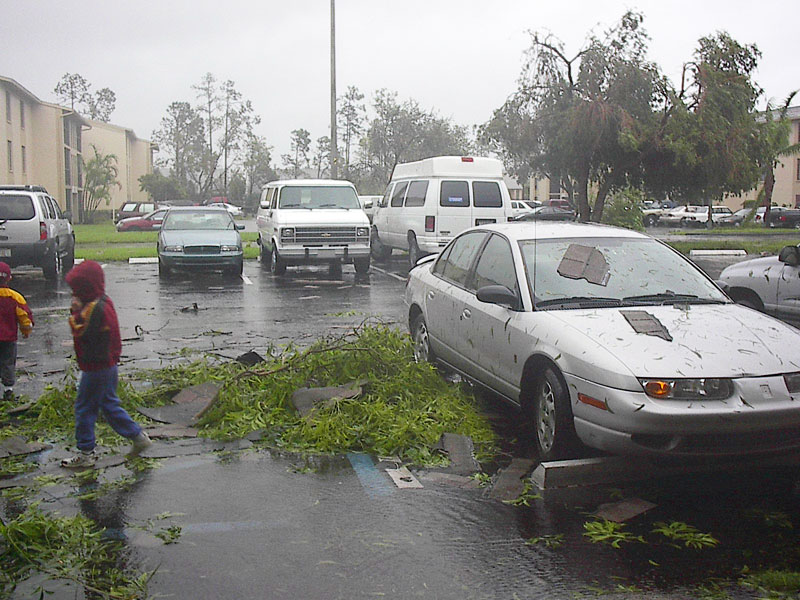 Fast forward to 2017 and you might have heard of a little (insert sarcasm) storm called Hurricane Irma. If you lived anywhere in Florida, and I do mean anywhere, you had your eye on this storm. Having reached category 5 status and predicted to make its way straight up the Florida peninsula no one in Florida was safe. Having wrecked havoc in the Leeward Islands, Cuba, Barbuda, Saint Barthélemy, Saint Martin, Anguilla, and the Virgin Islands Irma was a massive storm and caused many long lines, water shortage, gasoline shortage and more in our area.

The one thing we didn’t have that we wished we had when preparing for Hurricane Irma was a generator. Thankfully for us we were spared when Hurricane Irma blew through. We did experience 100 mph winds but we otherwise awoke to nothing more than some broken limps and outside clean up to do. However thanks to the Champion 3800-Watt Dual Fuel Generator we are even more prepared for the next storm or even an unexpected power outage. 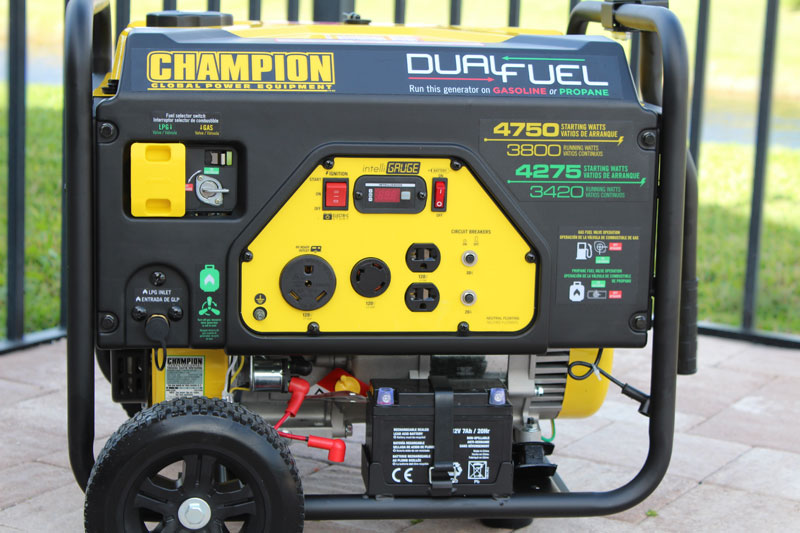 What we love about this generator is the dual fuel. This means we can either use gasoline or a propane tank. This is a great feature and comes in handy when there is a gasoline shortage. It can run 9 hours at 50% load on a full tank of gasoline and 10.5 hours at 50% load on a tank of propane. While this generator isn’t going to grant electricity to your entire home it can keep your food from spoiling, run an window AC unit, power your television and entertainment and pretty much make your life a lot more comfortable when your power goes out.

Another great feature is the electric start. This means it is started quick and easy with the included battery. A lot easier than continuing to pull on a cord in hopes that it will turn over. There are plenty of outlets available for all your different electric needs and an intellegauge. Easily monitor power output and track maintenance intervals with Intelligauge, which allows you to keep track of voltage, hertz and run-time hours 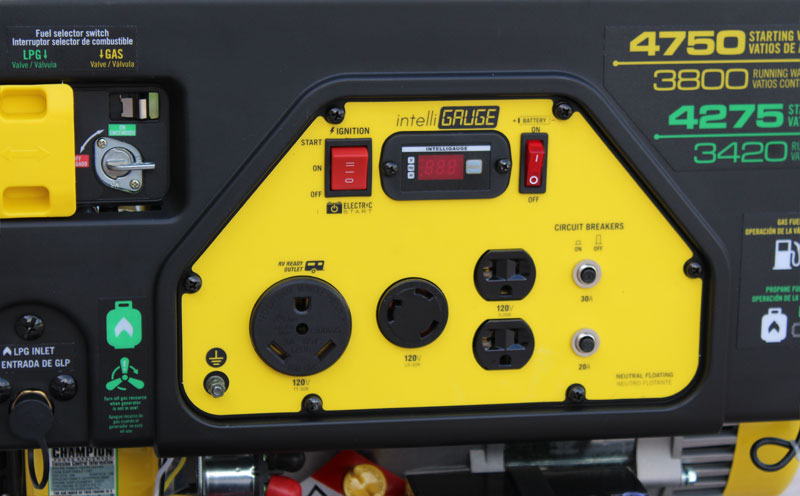 The unit is heavy as any generator would be, but thanks to the never flat tires and handle it is easy to wheel around to where you need to place it, OUTSIDE. 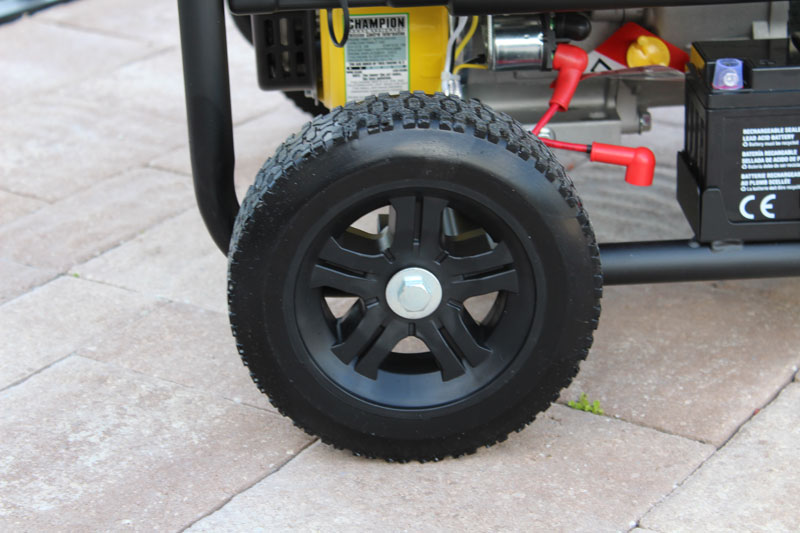 Having never had a generator before I was not sure what to expect, however the features of this generator are exactly what we need to keep us charged during a power outage. If you don’t know what size generator you need you can use their Power Needs calculator. For example I figure if we were out of power after a hurricane we would want our refrigerator, microwave, and television to run. The 3800-Watt Dual Fuel Generator is perfect for our needs!

The mom in me can’t help but also make sure that you are aware of the safety needs that come with owning a generator. Too often we hear of people that die or almost die due to carbon monoxide poisoning after a power outage. Champion feels the same way and dedicate a page on their website to generator safety. I encourage you to read through it, watch the videos and make sure you keep you and your family safe when using your generator!